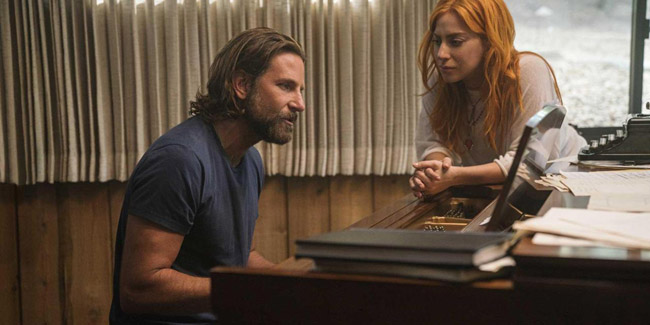 Now on its fourth remake, A Star is Born heads into a new generation with Bradley Cooper not just at the helm of this gut-wrenchingly emotional and epic version but also having a hand in co-writing the script and taking a rough and mentally damaged role. The history of this story goes as far back as 1937, it later went on to garner remakes in 1954 with Judy Garland and lastly in 1976 with Barbara Streisand and Kris Kristofferson as the enigmatic star performers.

In Cooper’s version, Lady Gaga strips back the make-up and elaborate costumes to put in a natural scene-stealing turn as Ally; Stuck in a job which has her waiting tables by day and performing in backstreet bars at night. A slight figure of a woman with a booming voice but still lives at home with her Father. Cooper, on the other hand, is the veteran musician Jackson Maine, modelled uncannily on Kris Kristofferson’s hairy biker look from the 1976 version.  The product of a long and sustained career in the music industry, Jackson is a raging alcoholic and a highly dependent drug addict with issues of deep-seated resentment against his own brother (Sam Elliott), as well as a waning career as he makes way for the younger generation.

Whilst on the hunt for his next drink after a gig, Jackson stumbles upon a drag bar, rolling into the joint and propping up the bar, he is instantly shaken by the only female performer – Ally – as she gives her own rousing rendition of La Vie En Rose. From this moment on the pair become inseparable. Unimpressed and unfazed by his global stardom, Ally spends a night on the tiles with Jackson drinking, fighting – Gaga gives a mean left hook to an intruding Jackson fan – and creating that eternal and deep love bond. Jackson doesn’t stop there; he wants the whole world to hear the spine-tingling vibrations of Ally’s voice and her sharp lyrical songwriting abilities and manages to get her on stage during one of his own gigs, and from that moment on a star is most certainly born.

Lady Gaga puts in the most natural of performances as Ally. She is a woman who loves her man deeply, warts and all. At home, she is the most loving and supportive wife to Jackson, never judgemental of his addictions. But on stage she is a complete sell-out, dropping that raw emotional power of her lyrics we are first introduced to and letting herself become the pop star sex bomb that sells records. Cooper’s Jackson – which Cooper drops his voice a couple of octave’s to achieve the gravel – makes you want to reach out and give the man a giant embrace as he struggles with the fame that Ally now has but also how she has disregarded that rawness in her talent he originally saw in her.

It’s an ambitious project for Cooper to take on but he wholeheartedly and magnificently nails it. He has put so much into the project from singing his own songs – and to crowds at Glastonbury and Coachella – to even co-writing some of the lyrics to those tracks too. The story may appear a bit thin in places but it’s an epic love story of award-winning proportions that will have you in awe from the raw talent and ugly crying at its heartbreaking conclusion.

A Star is Born is out in cinemas October 3rd.