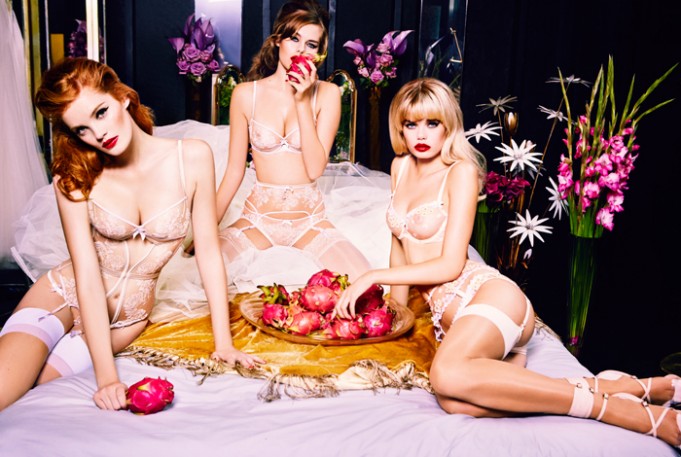 Agent Provocateur has unleashed some of the sexiest commercials the world has ever seen. Not for the faint-hearted or prudes amongst us. Agent Provocateur continues to release the sexual desire in both men and women across the globe and reminds us that its cool to be sexy.

Agent Provocateur’s stunning lingerie collection has been worn by the biggest superstars on supermodels on the planet. Madonna, Beyonce, Mariah Carey, Naomi Campbell, Kate Moss, Rosie Huntington-Whitely, Kiera Knightly and Kylie Minogue as just the tip of the iceberg when it comes to names that spring to mind.

Beyonce was spotted wearing the Agent Provocateur Varla Cover-Up while on holiday with Jay Z in Hawaii.

Kendall Jenner wears the Dakota Swimsuit for her Allure Magazine

Even FKA Twigs was seen wearing the Agent Provocateur Lexxi swimsuit at her L.A. concert

Then we had the Rosie Huntington-Whitley video that reminded us NOT TO FORGET VALENTINES DAY, the video that made men across the globe we mean wish Rosie was our girlfriend on Valentines Day. The video is below and again, it’s so seductive, its hard not to get turned on by the stunning visuals and tantalizing camera angels. Can you imagine getting a lap dance from Rosie?

Another video that grips me in places I cannot discuss on here is the Agent Provocateur Le Salon House Rules campaign. The 9 house rules are below in the video. I’m not going to tell you much about this one, I will let the video do the talking. I have a thing for rules No.2 & No.5 its gets me every time.

And the Behind Closed Doors video campaign starring Ashley Smith was so simple and creative that I had to watch it time and time again. With the slogan of “Make Love Not Dinner” it was a not so gentle reminder that your women should not be in the kitchen or doing housework. I find this video so alluring. Do you?

Do you remember the Always Remember Your Agent Provocateurs video? Paz De La Huerta was Agent Provocateur’s bewitching Autumn Winter 2011 campaign star. The 1.09-minute video is scandalously sexy. Not sure how I would feel if my girlfriend done The Drop like that, but watching on the commercial is fantastic.

And if you are the voyeuristic type, there’s a whole 6 min’s of Josephine de la Baume being filmed undressing through a hotel window. Ohhhh, cheeky right? What’s even cheekier is the exercise routine in Agent Provocateur lingerie and the fact that again, such a simple concept can create spectacular results.

And let’s not forget the Agent Provocateur: Control Yourself video campaign. Strap in and buckle up: sometimes the only way to get a handle on things is to control yourself. Melissa George, Chloe Hayward and Elettra Wiedermann took control of their own destinies in the Agent Provocateur Autumn Winter 2013 campaign.

And I love the retro feel of Baroness and Bullet video which was part of the 2010 Private Tapes collection that featured 15, less than 60-second clips. The playlist is below.