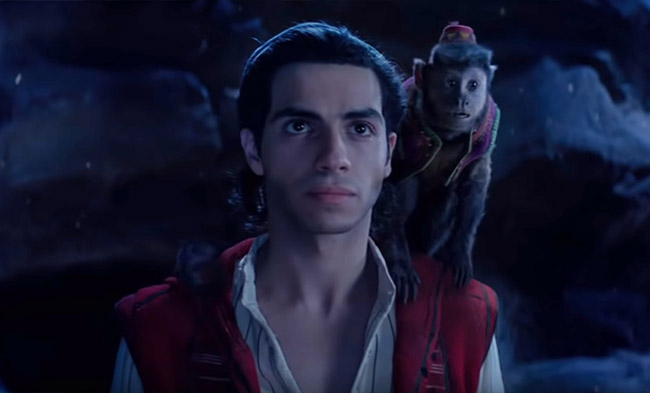 Filmmaker Guy Ritchie embarks on a whole new world in Disney’s latest live action remake of a movie that is close to the hearts of a whole generation of film fans. Delivering a film that isn’t as wholly terrible as you might have expected thanks to the charismatic charm of its leading cast. Reimaging Ron Clements and John Musker’s 1992 classic in which Robin Williams played the genie in the lamp was never going to be an easy job to satisfy the hunger of the those that loved it so much, and it probably won’t but the new generation of Kids will take the latest offering to their obsessed hearts.

Based on the Arabian Nights tale, One Thousand and One Nights, the film tells the story of Aladdin (Mena Massoud), a rather dashing street thief with charm and cuteness in equal levels. On his daily pickpocket routine, aided by the scene-stealing Monkey, Apu, he makes an acquaintance with a female servant from the palace as she takes bread from a trader to give to the poor but cannot pay. Dazzled by her generosity and her stunning good looks, Aladdin lends a hand in helping her escape, but little does he know that the woman he is about to fall in love with is actually the Princess of Akabar, Jasmine (Naomi Scott).

The town sets and sequences are all too familiar, as Aladdin is chased through the Arabian streets, jumping from building to building, catapulting through the air; if you didn’t know better you might just think you’re reliving Mike Newell’s 2010 Prince of Persia.

With any dated story, Jasmin is very much the princess; she is seen as the lesser human than her male counterparts. However, Scott’s Jasmin is a staunch feminist, yes she wants the choice to be able to marry whomever she pleases, but above all she wants the right to be able to take the throne after her Father steps down, a motion that has never been accomplished by a woman, but she fights for that right no matter what the cost. If that isn’t the greatest message to convey to the new generation of young girls about to become totally obsessed then what is?

How can we forget the controversial genie, from day one, Will Smith being cast as the genie in the lamp has proved a big talking point?  Aladdin, for a chance to be able to be with the princess, comes to a deal with the King’s “loyal” but evil second in command; Jafar (Marwan Kenzari) tasks Aladdin to retrieve the lamp from the cave of wonders. When Aladdin accidentally rubs the lamp himself, we witness big willy’s big blue genie for the first time and Aladdin becomes his master and the recipient of three wishes. Smith’s genie can, at times, seems to channel Robin William’s camp persona but on the surface, he takes us back to the character of the Fresh Prince, one that made him a household name. He has a few song and dance numbers of his own including an original from its predecessor, but for a contemporary feel, he throws in a rap or two.

Ritchie leaves behind his trademark slow downed style of editing in favour of some questionable speeded up dance sequences which look cheap and badly edited in the flamboyancy of imagination clearly taken from Bollywood. Most of the songs are pretty forgettable bar from the originals and Jasmine’s own but 2019’s Aladdin not without a few transparent and not so transparent inaccuracies is a paint by numbers remake with some balls.

Aladdin is out in cinemas’ May 22nd