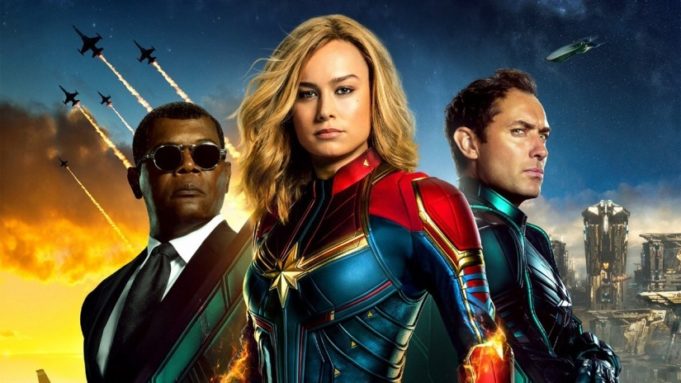 A no-nonsense, punchy and fierce introduction to Captain Marvel – Who runs the world? GIRLS!

Finally, The MCU has followed Warner Bros DC lead with delivering its first female lead superhero film despite the dummy throwing of certain fanboys for this particular comic book adaptation. Leading the charge with our own real-life feminist hero in Brie Larson, a woman who has been compared to Hitler simple for stating she wanted a more diverse roster of press on the recent tour for the film, like the character she has had to fight off some pretty toxic attitudes and she has done it with style.

Set during the ’90s and pre Avenger’s, Larson plays Carol Danvers aka Vers aka Captain Marvel, a fierce fighting machine on an elite Kree Military team with no recollection of her past. Under the guidance of Jude Law’s Yon-Rogg, Vers tries to control her powers which spiral into a superhuman strength once her emotions take hold. If there are any comparisons to be made with an emotional woman at this point, I for one don’t mind being compared to a scary mean fighting machine when my emotions take over.

The origin story gives birth to our new saviour – if rumours are too believed in regards to Avengers: Endgame – As Vers takes root on Earth while on a mission to stop an intergalactic war between two Alien forces. We aren’t just here to see a fierce woman save worlds, we are here to witness her journey of self-discovery, a journey that opens up her mind to a new world of possibilities with a subtle hint of unspoken feminism. A token raising of the eyebrow or a damning look with an all-knowing smirk screaming to the fellas I am just as good as you are… in fact, watch this I’m better.

Comedy has always been a staple of this universe and it’s still here in abundance. Why not pair that with the internet’s most cherished thing, a cat by the name of Goose, once belonging to Annette Bening’s Mar-Vell. Goose plays a pivotal part in the second half of the film, pairing the cat with a de-aged and eye-patch less Nick Fury (Samuel L. Jackson) hit a few moments of comedy gold. Oh if you’re still asking the question of how Fury came to lose his eye, all is explained here.

Directors Anna Boden and Ryan Fleck have come from an indie background with films such as Ryan Gosling’s Half Nelson and Mississippi Grind, atheistically their grainy raw stamp gives the picture an edge we don’t usually experience in the genre. It’s a perfect pairing for its 90’s nostalgia setting. Heavily featuring a mixtape soundtrack of iconic tracks to a crash landing scene in which a Blockbuster store breaks Vers fall. You’ve got that Top Gun vibe with the switched gender-flip and most importantly it speaks to all those little girls always pigeon-holed as tomboys screaming the message, no matter how many times you’re knocked down, get back up and try again. Even Captain Marvel’s ascent into space has an animated CGI vision you would expect from any good 90’s kids series.

Larson brings an understated cheekiness to Captain Marvel; sometimes vying on the corny in her superhero stance she gives meaning to an unusually nuanced character. Fury can almost be considered Jackson’s second skin but here, 90’s Fury is still wet behind the ears, full of naivety and optimism before the cynicism creeps in. Ben Mendelsohn as the shape-shifting Skrull Talos is nothing short of deceptive drama and tickling funny.

Full of knowing nods to the Universe including Agents of Shield, it’s bound to push a few buttons when Fury stumbles on the name for his team of superheroes – Avengers. Like any of these films, it’s always worth waiting until the very end credit has left the screen.

Captain Marvel is out in cinema’s March 8th