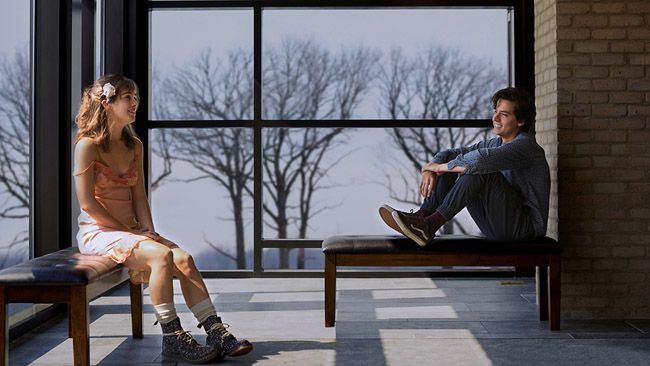 Commendably highlights the issues of Cystic Fibrosis sufferers, you’ll learn a thing or two about this illness as well as be sappily charmed.

If there is one guarantee you could take from any teen romance where terminal illness is the villain of the piece, it’s the emotional rollercoaster any filmmaker is going to embed in its very foundations, take Josh Boone’s The Fault in Our Stars as the prime example. This eye-opening world of Cystic Fibrosis sufferers does this with so much gusto even the most cynical of us do not come away untouched.

Seventeen-year-old Stella (Haley Lu Richardson) on the outside, looks like every other teenage girl, her life couldn’t be any more different having to deal with the pitfalls of Cystic Fibrosis for most of her life.  Add in the fact she has major control issues, suffering from OCD, her medication routine is regimented and she follows the rules to the book feeling it’s her duty to stay alive for the sake of her parents stemming from an earlier tragedy which hit the family. Every few months, having to make a lengthy stay in the hospital for a routine MOT she gets to spend time with her best friend Poe (Moises Arias) but most of their hang time is via text or Face time due to the fact CF patients aren’t allowed within six feet of each because of the high risk of passing bacteria between them.

This, of course, needs the help of Riverdale’s Cole Sprouse’s Will to get even more teenage girl bums on seats. The complete opposite of Stella, but also suffering from CF, Will is the proverbial bad boy. Constantly breaking the rules and missing his meds, he manages to annoy Stella at every turn. Somehow his cheeky banter and clichéd persistence wear her down and the two become inseparable – well except for the five-foot snooker cue which becomes their separation guide.

It has all the staple genre troupes you would expect, girl falls for the boy who doesn’t want to live up to the reality of his illness. Stella tries to help Will make some sort of order out of his life full filling not just her OCD but Will’s intrigue. We have the adorably cute gay best friend who comes out with all the best witty one-liners. Po’s own subplot open’s up another avenue of coping mechanisms, he’s just a boy who wants to be loved but just can’t let anyone get close enough to love him in order to stop that person experiencing the pain of having to eventually lose him.

Don’t forget our leading lover’s defiance of the rules which sees them leave the hospital to spend time on a frozen lake only for disaster to strike. Expected yes, but it’s all done with heartfelt believability and great performances it sucks you right into its core of slushy drama. It’s quite rare for empathy not to feel forced in this genre but there is something quite breezily natural in the performances from our leads, Richardson and Sprouse embody any normal American teen who just wants to live a normal life without the constraints Cystic Fibrosis has forced their fate into.

With a few twists that will break your heart – one quite surprisingly so – director Justin Baldoni does a commendable job in highlighting the issues of Cystic Fibrosis sufferers, you’ll learn a thing or two about this illness as well as be sappily charmed.