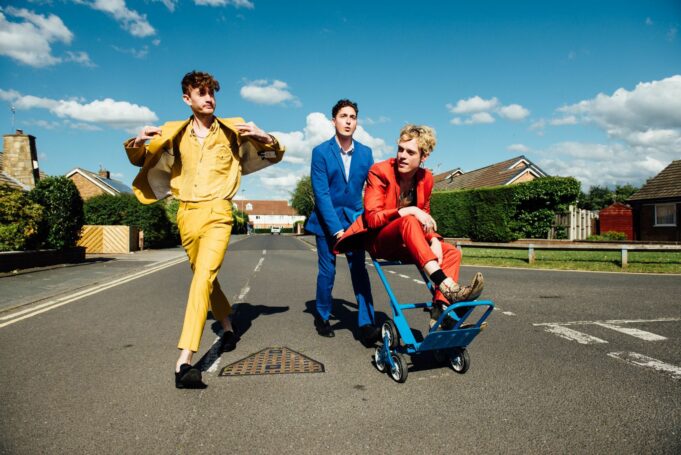 King No-One is back with their exciting new track ‘Roll Of The Dice’.

Stepping up to take their rightful place amongst alt-pop royalty such as Everything Everything and Foals, York three-piece King No-One have spent the past seven years turning heads and breaking hearts with their own inimitable brand of alternative indie-pop.

Despite their northern roots, the group eschews the traditional grit of many of their contemporaries, opting instead to emphasise optimism and thus provide even their darkest offerings with a buoyancy that’s impossible to ignore.

Having built a remarkable live reputation including sold-out UK tours, BBC Radio 1 Stage appearances at Reading and Leeds Festival and drawing thousands of fans to the likes of Truck and Y-Not Festival, TRNSMT and Tramlines, the band continue to use their platform to share the message they have shared since their first show: regardless of colour, gender, sexuality or financial status, No one is King, Everyone is born Equal. An ethos that has resonated tremendously amongst their LGBTQ+ fanbase.

I chatted with Zach about their new track, pre-show rituals and embarrassing on-stage moments.

How do you first come together?

It was a long time ago now. Joe and I had not been friends for like fifteen years, he didn’t like me at first. We eventually became friends and realised we actually had a lot in common. We used to write Spanish pieces and do classical competitions. We met James probably about 10 years ago now, which is crazy thinking about it. We aren’t the same band that we used to be. We started when we were seventeen so you can imagine how much we’ve evolved since then.

Was it difficult to agree on a band name? Is there a meaning behind it?

No, actually it was far too easy! I came up with the name when I was sixteen years old and at the time it was far too cool. I don’t think the others had any input in it other than “Yeah cool”.  King No-One means no-one is king and that we’re all equal.

How do you think your latest single differs from your earliest work?

It differs because it’s more nonchalant than our previous work. Obviously, through time, we’ve changed. It was written during a time in my life where I had so much going on. There were so many things at the time that I couldn’t change.

Yes, definitely. It keeps me in check and I could have something in my head for ages and not know how to deal with it but then eventually a song comes out of it.

How do you prepare backstage for a show? Do you have any pre-show rituals?

Yes. There is a few. A lot of messing around, we do get strict at one point but we usually just piss around. We have a room lockdown where it’s just the band and we do vocal warm-ups just before we go on stage.

We know gigs don’t always go as planned but have you had any embarrassing moments on stage?

Absolutely. So many! I think that’s what makes a good show really. Once I got the whole crowd to count me down as I jumped off this balcony, it was from quite a height as well. As I landed, my back leg took a tumble and the whole audience burst out laughing. But I delivered a few jokey lines and then got on with the show.

Three items that would be in your tour survival kit?

If you could organise your own festival, what would it be called and who would be your dream performers?

It would be called Leeches Festival and the main performers would be Phoebe Bridgers, Twin Shadow and Big Thief

What do you hope fans take away from your songs?

I would hope lyrical inspiration and I hope they see the alternative side of lyrics and hopefully inspire upcoming bands.

What does the future hold for King No-One?

That changes all the time. When you think about life and what you want to do with it, if you had asked me a few years and go and asked about success, I would have said I wanted everything. I realised the more recognised we became, the more I wanted. I just want to be able to see the world and not from a tourist point of view.