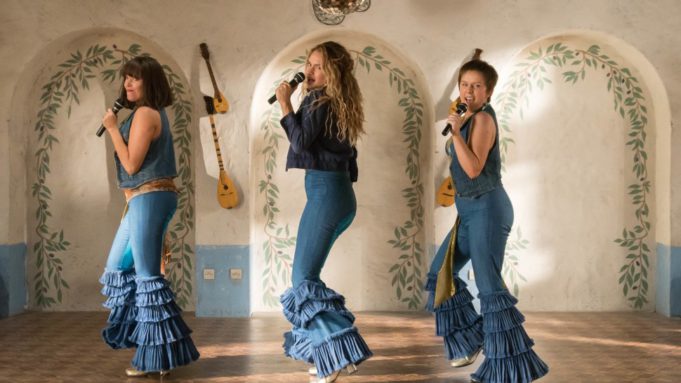 Long-awaited sequels seem to be the special of the month. 10 long years after Mamma Mia hit our screens; the Abba musical is back and promises to be just as big a hit as its original big screen adaptation. Filled to the brim with a number of Abba bangers and the return of the original cast; be prepared for your emotions to take a ride on a super trouper train to Fernando.

Returning to the Greek Islands of the first (but filming took place in Croatia), Sophie (Amanda Seyfried) is in the midst of launching the newly refurbished hotel her mother Donna (Meryl Streep) took over before she was born. Sophie’s now-husband Sky (Dominic Cooper), is away in New York doing an hoteliers course, where he has been offered a full time position. Anxious that no one will show up to the grand opening, a number of unfortunate events spell nothing but disaster and it’s left to Sam (Pierce Brosnan), Tanya (Christine Baranski) and Rosie (Julie Walters) to provide that much needed support.

Wovern into the present day storyline, are flashbacks to the past exploring the young Donna’s (Lily James) journey to the Greek Islands. Opening with ‘When I Kissed A Teacher’, we are introduced to Lily James’s Donna. Wild and free spirited and flanked by the younger Tanya (Jessica Keenan Wynn) and Rose (Alexa Davies) we are christened with our first song and dance number. As Donna tries to find her path we travel along the pinnacle moments that were previously touched on in the first.

Each flashback is a momentous song and dance set-piece as Donna meets Sophie’s three possible fathers, young Harry (Hugh Skinner), Young Bill (Josh Dylan) and Young Sam (Jeremy Irvine).  All capricious in their arrival but oh what an odious joy that makes the heart skip a beat. What makes each and every scene compatible with the palette is its ability to mock itself and play that up for the audiences. Let’s face it in these bleak and miserable times you can’t beat a bit of unadulterated silliness to transport you to the open arms escapism.

Least we not forget about Cher, as legendary as the foot-tapping catchy Abba tunage, making a short but ever so memorable entrance as Sophie’s glamorous granny, Ruby. Armed with her own solo number with Fernando as she serenades Andy Garcia’s character but it’s still one of the legacy characters that steal the show with her cutting one liner’s, Christine Baranski. However, it’s the legacy cast that takes a back seat as the younger counterparts steal the show with their show-stopping steps and laugh a minute dialogue.

Ol Parker’s sequel is utterly ludicrous (in a good way), joyously fun and has an emotional arc which will stick in the back of your throat. If you are expecting that all glittery, spandex wearing cast number you will not be disappointed with copious amounts of laughter bringing you to tears.

Mamma Mia! Here We Go Again is out in cinemas July 20th.