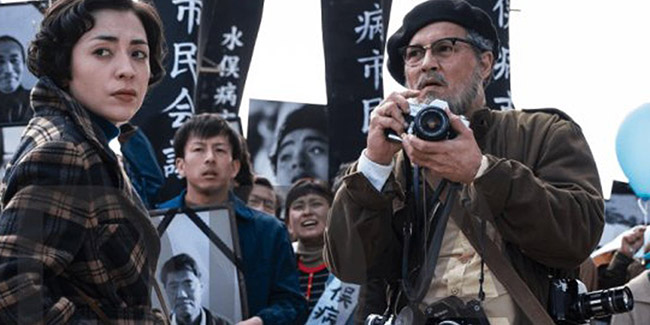 Filmmaker Andrew Levitas delves into the perils and righteous fight of famed photojournalist W. Eugene Smith with a furiously calming depiction of a fascinating and compelling narrative. It’s a drama that highlights the evils of big corporate companies polluting innocent towns and their residents and their lack of scruples when big money is respected more than the lives of innocent people.

Based in the early 70s’, Johnny Depp takes on the role of Smith in his later life. He’s the stereotypical alcoholic and recluse who has abandoned his own children and his beloved career. After a meeting with Life Magazine Editor Robert Hayes (Bill Nighy) – who hands him a big secret commission, Smith ventures to the Japanese coastal city of Minamata and becomes embroiled with the City’s plight of taking on the industrial Chisso Corporation after decades of mercury poisoning at their hands.

Armed with only his trusted camera and teaming up with a young Japanese correspondent Aileen (Minami), Smith’s images from the toxic village give the disaster a heartbreaking human element, and his initial assignment turns into a life-changing experience, but not before the many obstacles put in their way makes him doubt the whole project.

Levitas never shies aware from the visions of deformity the Mercury poisoning has caused, many from birth. From extreme legs/feet and hand defects to tremors in those that were lucky enough to not have their quality of life snatched away from them. This aesthetic, along with the feeling this is shot from a photographer’s artistic eye gives an extra level of realism and reality to a story that isn’t the first instance of corporate neglect.

Depp’s heartfelt performance takes Smith on a journey of a man who has been bitterly torn apart by life but when placed in the hands of adversity there is a gentler side to the man. In one particular scene, he succumbs to caring for Akiko, a character so severely affected by the poisoning they cannot function, both hands and legs are paralysed and they can’t even feed themselves. Depp is aided by the passionate yet understated performance of Minami’s Aileen who has a calming power that with just a stern look brings any man into line.

Unfortunate for the world we live in today, these stories of environmental damage from corporate corruption are more common than not. With the likes of Deepwater Horizon, the Flint water poisoning and more which are highlighted over the closing credits we need films of this nature to hammer home the message; you aren’t just making people suffer but you are killing our world too.

The film is in cinemas now.