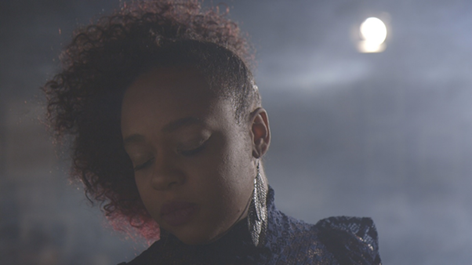 Nazarene, a soul singer and a prominent figure on the London music scene, has her new EP, ICONICS, available now – released on April 3rd.

The 4-Track EP contains Spins Of The Moon, Marlon, Otis – King of Soul and a live jam of Follow Your Heart.

Nazarene is involved in the Ultimate Divas project where she plays the role of Aretha Franklin surrounded by some of the best performers from the West End, Musical Theatre and Television. She also played an important role in the recent show “Pale Imitations” as a composer and singer, whilst playing with numerous talented musicians who also make an appearance on her new EP. Musicians Cole Toury and Lascarache Laurentius (Laur) follow her across from Pale Imitations to ICONICS.

Musicians David Will Mitchell and Cole Toury wrote the lyrics and music respectively for the Iconics project, with Toury also producing the tracks. The project took inspiration from cultural icons; Marlon is dedicated to Marlon Brando, Otis – King of Soul is a homage to the legendary Otis Redding and Follow Your Heart is based on the famous speech Steve Jobs made in June 2005 to the new intake of students at Stanford University.

The lead song on the EP is Spins Of The Moon, an ode to the late great Martin Luther King. Nazarene released Iconics a day before the 50th anniversary of his death as a fitting tribute to him.

Nazarene has released a music video to accompany Spins Of The Moon, the video was acclaimed by the Martin Luther King Research and Education Institute based in Stanford, California, on the occasion of the 50th commemoration of his death on 4th April.

Be sure to follow Nazarene on her Social Media to not miss future tour dates.