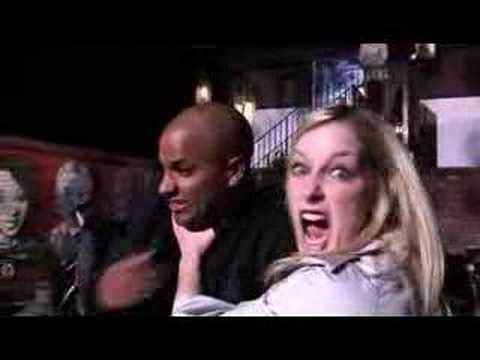 After receiving a number of physical injuries his dreams of football stardom were crushed however, Hollyoaks heartthrob Ricky Whittle who plays sexy rookie cop Calvin Valentine soon realized he could be passionate about another career when he started acting.

Following his fathers instruction’s he started studying law but took up modeling on the side and from there the 25 year-old was cast on Dream Team and this is where he made his acting debut.

“Acting is sexier then football. It’s great; you can be a completely different person and get away with murder. My character in Dream Team got to drive around in sports cars and sleep with slags.”

From the sound of his laid back manner and pleasant tone, Ricky is far from his dastardly Dream Team character Ryan Naysmith and is rather coy about being seen as a sex symbol. He humbly dismissed the idea that people see him this way.

“I wish! You can’t really see into that rubbish. When I go to visit mum and I’m watching the football in my trackies, she says, ‘if your fans could see you now’. As long as you don’t get caught in the hype you can stay grounded.”

It sounds rich from an actor in a cast of stunningly flawless twenty-somethings. It’s difficult to believe that there aren’t high-strung egos flying around the set. However, Ricky is insistent that the Hollyoaks cast are like a happy family.

“There’s only been one actor I’ve not got on with.” Without giving away who it is he says, “He was in Dream Team and he hasn’t done anything else since. But everyone is usually really nice. You’d expect arrogance but everyone’s lovely. It’s a great family.”

From Hollyoaks to Hollywood
Ricky dreams of going beyond the small screen and would love to work along side both the sexy and the simply ridiculous. “I’d like to go into film. That’s the dream. I’ve only been in acting for 5 years. I want to go bigger and better.”

“I’d love to be Eve Mendes’ love interest. I’d [also] love to do comedy to work alongside Eddie Murphy or Jim Carey. They’d keep you on your toes.”

Despite his dream Ricky has had his fair share of challenges so far, having played a gay character in his role in Holby City. His then girlfriend, DJ Sassy was not best pleased and I suspect it tainted his sexy image. “It was hilarious I was in a full on relationship at the time, and the guy that was playing my boyfriend, Stuart Manning, was in a full on relationship too. She [DJ Sassy] didn’t want to see that at all.”

As for any current love interests now, Ricky is all loved up with fellow Hollyoaks actress Carley Stenson (Steph Dean). So for now ladies he’ll just have to continue to be your daily evening eye-candy. But if you see an ad in the singles column with the description, “I’m tall, dark, with a crazy sense of humour, very active and outgoing but sensitive and a good listener,” then you know Ricky Whittle is back on the market, he states with a smile.

Hollyoaks is on weekdays at 6.30pm on Channel 4