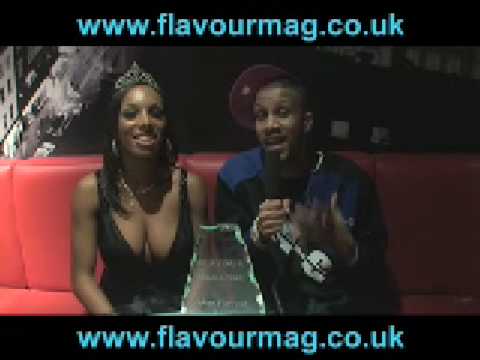 Miss Flavour 2008 talks stage nerves, making an entrance and shares her career aspirations of becoming a journalistSasha Shantel Bennett, the recently crowned Miss Flavour 2008, exudes class, confidence – and a bit of comedy too. As well as having beauty, brains, and a body any woman would be envious of and any man would find difficulty to look at and walk at the same time our one-on-one interview was one of most fun ones I’ve had the pleasure to cover, and the photoshoot after was well worth the wait! Here’s what Queen Sasha had to say…

So when did you find out about Miss Flavour 2008 and why did you finally decide to enter?
I read about it on Facebook. I told myself I wouldn’t enter [pageants] anymore, because I thought, ‘too much, no more’, but I thought this time, ‘okay, one more’. It felt quite a positive step and I thought I could possibly go far in this one.  So I entered it – and here we are!

How long was the initial selection process, then?
Well, I went to casting and then got a call-back two weeks later.

Did you get along with the other contestants?
Everyone was nice! You know when you’re wondering if they’re gonna be nasty with their claws out and all that …but no. On the night, I was saying to people how inspiring the other girls were; they’ve progressed further than I have. Some have websites, some have their own clothing lines, they’ve been in magazines – that’s inspiring to me what they’ve done!

I remember in the question and answer period of the show, you mentioned that you had the combination of beauty and brains and…
‘Pretty face and body!’ (Sasha gives me a coy, flirty look.)

Is that what you said?
Yes, specifically. (laughing)

Well, to the first part there’s no question, but what makes up the ‘brains’ part of you?
It’s not just education, I mean… I’ve got that, but I think it’s just more to do with common sense; and to think in those terms, and I’ve got that ability.

Out of curiosity, what is your educational background?
Well, I’m not gonna sit here and boast about my CV, but suffice to say, it’s pretty impressive.

Please, impress me!
Okay, education-wise, I’ve got no gaps, I went from secondary straight to four years of college, three years of uni, I got 5 A-levels, 10 GCSEs A-star to C. I got my degree while working three jobs at the same time so… not bad.

Not bad at all! So what did you get your degree in?
I have a BA Honours in English Literature and Drama.

So what are some of the things you’d like to accomplish in this new role as Miss Flavour 2008?
I just want be involved in magazines and to write for one. For 6 years I was an entertainment editor for one; it’s just an opportunity to go a bit further. I didn’t meet people and conduct interviews with them until recently, and I’d love to do this more!

Now, as far as the night of the pageant went… Sorry, but I have to bring this up…
Oh… I know what you’re gonna say – I think – but… go on.

Now, you were the last contestant to come on, right?
I wasn’t happy about that – the fact that I was last on, was I?

But you actually made an entrance—the lights all went out before they called your name! It was a big moment! (laughing)
Yeah (laughing) the lights went out!

Did you think that you were going to win that night?
There’s no point entering if you don’t think you’re gonna win. I had to be confident, but I had a list of three people I could possibly lose to in my mind. So there was always the chance I could’ve been fourth.

I learned that you’re seeing someone, so what did he say or do to win you over?
Okay, I was 15, it was science class, he sat next to me, he put his hand on my hand and said, ‘You are beautiful’, and I said, ‘Thank you’ and thought, ‘Oh, wow – he’s amazing!’ And 7 years later here we are (she says this, laughing, but the men present just shake their heads slowly in disbelief).