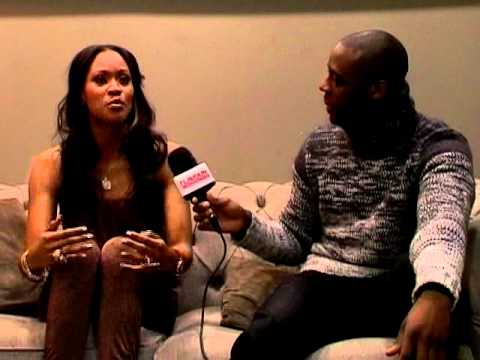 Waiting in her dressing room while she’s on stage rehearsing for a later performance, I find myself flicking through the TV channels, nervously waiting for her to join me. When eventually introduced to Shontelle, I steel myself for the interview and extend my hand in a formal greeting… but instead, the Bajan beauty pulls me into an enthusiastic embrace! And breathe…

She’s sold more than a million copies of ‘Impossible’, her biggest single to date, as well as already having enjoyed mainstream success with her chart-topping debut ‘T-Shirt’. You’d think she’d be in her hometown, relaxing on a sunny beach, but the talented R&B singer/songwriter is well on her way to earning international acclaim with latest single ‘Perfect Nightmare’ taken from her second album No Gravity.

Flavour catches up with Shontelle to talk about her new single, touring with Jason Derülo and how well she really knows Rihanna.

The last time we spoke was just before the release of your debut single ‘T-Shirt’. You’ve come a long way since then, so what have been some of your best moments?
It’s been really exciting to know that ‘T-Shirt’ did so well. Since then I have been able to tour with New Kids On The Block, Akon and Beyoncé, as well as releasing another album and an even bigger single [‘Impossible’]. It’s just been incredible to see the growth and to keep it going.

You’ll have a lot of stories to tell the kids then…
Yeah, whenever they come along, but I am not ready for that yet.

If you hadn’t taken a risk and left law school to pursue your music career, you might have found yourself acting as Lindsay Lohan’s lawyer instead of singing and writing music. Would you say the gamble has paid off?
[Laughs] I would say it’s paid off, because music is my number one passion, it’s my baby! So the fact it is really working out for me is good, but like I said before, the knowledge of the law comes in really handy because obviously there is a business side to music.

Where does your album No Gravity fit in with the Shontelle journey?
I would say No Gravity is a reflection of where I was at the point when I was putting it all together. I also had the introduction with Shontelligence, which everybody knew as [by] the island girl from Barbados. I felt that I needed people to know I didn’t just do slow ballads – I also like dance music and going to parties as well as shaking my bootay.

You’re from Barbados – how much of an influence has that had on your music?
I think it definitely creeps in at times. I mean, if you listen to all my songs you would be like, OK, I feel that little island thing right there. I have also been writing for other artists, including Rihanna – so if you like that ‘Man Down’ song, that’s me on the pen.

You co-wrote ‘Man Down’ with Rihanna for her new album, but just how do you go about writing a hit song?
I don’t know, it’s pretty crazy because I randomly got a call while she was on the Last Girl on Earth Tour, and she was like, ‘Dude, I need you, I’m working on this song. I know you’re the perfect person.’ She was actually in the studio when I was writing it, which was such a good vibe. I guess when I work with other people, I tend to draw off the energy from that person who I know I’m working with.

There was a rumour that your hit single ‘Impossible’ was turned down by Leona Lewis – so you must feel a bit smug, right?
I have been hearing that rumour for a long time, but I didn’t believe it until it was actually confirmed while I was in Norway. I was like, wow! I’m glad you turned it down [laughs], because I got to sing it. I mean, people turn down songs for different reasons. I don’t know what her reasons were – maybe she couldn’t relate to it at the time. Either way, I’m happy I sang it for all those heartbroken people. What’s the story behind your new single ‘Perfect Nightmare’?
Basically, sometimes you find yourself in love with the wrong person. You really need to walk away, but it’s hard because you’re in love. So it’s as if you’re enjoying something that’s bad, similar to a perfect nightmare because all the feelings are there and it feels so good like ‘I’m in love’. However, there could be a number of reasons: maybe the person is abusive to you, or you could be in love with someone else’s man or girlfriend. That’s what it’s about and it’s up to you to tell yourself, no way, I need to get out of this situation.

You recently posted on Facebook: ‘If you’re in a bad relationship, be strong and walk away, don’t get caught up in a perfect nightmare.’ Is this something that you can relate to personally?
Absolutely, I have been there before, and trust me, I got out. I said no way! In the song it also says, ‘If it’s from you, I don’t mind hurting’ – that’s a really crazy affirmation. I just said, I am hurting, but I don’t mind? Once you realise that your life is getting a bit crazy, you have to start making some changes.

You were recently on tour with Jason Derülo, what was he like?
In the flesh he is so cool. We’ve been friends for a while, but just touring with him and getting to share fan bases is crazy because when you’re performing at a Jason Derülo concert, it’s like hundreds of hormonal teenage girls losing their minds. His abs are to die for. I mean, at the same time my fan base are those same little girls – I think of them as my little sisters. Just hearing people scream lyric for lyric at the top of their lungs is just great.

Everyone is talking about your childhood friend Rihanna, who is currently dominating the charts. As we’re big Ri-Ri fans ourselves, we would like to test your knowledge about her in our ‘How well do you know Rihanna?’ quiz.

What was her first number one hit?
Oh, my gosh, did ‘Pon de Replay’ go to number one? Actually, it was ‘SOS (Rescue Me)’.

How many push-ups did you get Rihanna to do for you while in cadet school?
[Laughs] It was 10, baby.

How many tattoos does Rihanna have and where?
There’s one on her leg, her neck, behind her ear and on her stomach. So I think she must be up to at least 13 by now…

What part of her body did she insure for $1 million?
[Laughs] It was her legs.

‘Perfect Nightmare’ is out now