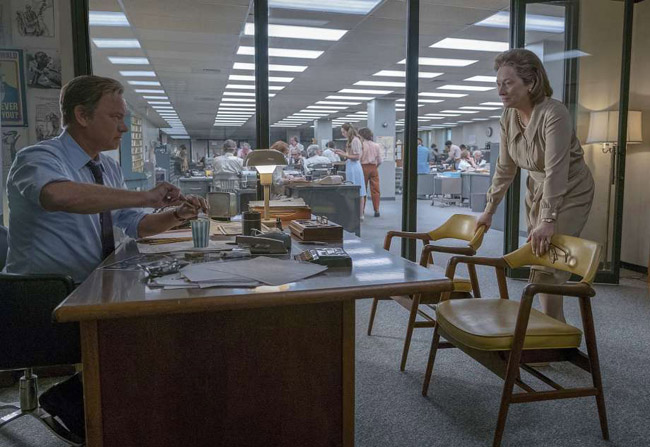 Steven Spielberg’s multi-layered rich visitation to the era of 1971, when women were still second-class citizens who had no place in the world of journalism; and the US Government where barefaced lying to their citizens, is a timely stirring masterpiece and a reminder of how far we have come. But those hurdles still loom large in our society.

The basis of Spielberg’ based on true events thrilling drama in which Tom Hanks and Meryl Streep effortlessly shine, centres round the Freedom of the press. When The Washington Post and The New York Times fought together to expose the government secrets of the Vietnam War, despite Richard Nixon’s attempt at silencing the press by slamming them with judicial proceedings. Spielberg delivers much more than this simple story as he unravels the story of Katherine Graham (Streep), publisher of The Washington Post, and her struggle as a woman to lead the publication in a world dominated by men, trying to undermine her and the complex decision on whether she should run the story, despite the crushing implications it could lead to.

Streep’s Graham is a timid family woman, more of a socialite than a leader. By default, she has been left in charge of the reins at The Washington Post after the untimely death of her husband – who had been handed the company by her own father over her – with no idea how to oversee the company. As the film progresses, we watch her struggle to make her voice heard over the dominant male board members and lawyers. Dithering over whether to publish the Pentagon Paper’s after The New York Times has been silenced by the Nixon Administration before she finally stands her ground and gives the green light to publish. Producing a tranquil air of victory, her stubbornness on her decision riles an urge to cry out “go on girl” from the audience.

Graham’s confidence in her ability grows thanks to the respectful and special relationship she has with her editor, Hank’s Ben Bradlee.  Hank’s Bradlee is a far cry from the one portrayed in All The President’s Men. Forever striving for that leading story, he is cocky and unmovable on his moral high ground. Even in his home life, in which some of the story unfolds as the reporter’s frantically type up the copy of the story while waiting for that all-important decision, we see him engaging with his daughter to up the price of the lemonade she is selling, we see a softer side of the, at times, short-tempered man.

The third layer involves a nostalgic feel for how newsrooms where once run and journalists worked. Adding a grainy 70’s aesthetic that has no sign of a mobile phone or a computer. Typewriters splutter out words of which are then rolled up and stuffed into a suction tube, transporting the story down to the large printing presses. Transferred to minute blocks of wording to print hundreds of papers, Spielberg’s attention to detail is an authentic history lesson.

This story is not just a retelling of how freedom of was needed to expose a massive cover-up of government secrets that spanned three decades and four U.S. Presidents.It’s also a critical story on the beginning of feminism within journalism and integrity of investigative journalism to unearth the truth. Hanks, Streep and Spielberg, in their first collaboration collectively are a force to be reckoned with.