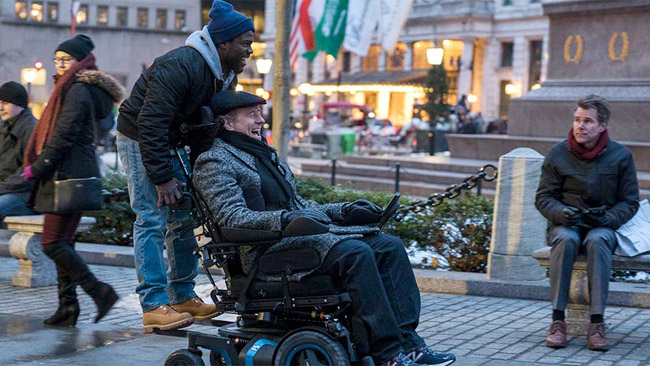 An enjoyable life-affirming movie that stays true to the heart of the original film, reiterating there’s more to Hart’s acting abilities than his Calamity Jane skit.

With the increasing popularity of the remake, reboot or whatever you want to call it, there’s a certain uncertainty in whether the poor filmmakers who take on the task can do the original justice, or create something almost resembling a car crash. Director Neil Burger has been given just that task in recreating the 2011 French smash hit dramedy, Untouchable for an English speaking market. Almost a carbon copy of the original, this isn’t the car wreck you would expect but a charming buddy story with a fair few familiar troupes.

Bryan Cranston’s Phil is a depressed, wealthy quadriplegic. Living in a plush apartment surrounded by high tech gadgets and what some may call art. Aided by his lifelong friend and assistant, Yvonne (Nicole Kidman), it’s become apparent they are in need for an extra pair of hands to do Phil’s heavy lifting. Enter Kevin Hart’s Dell.

Dell is the complete opposite of Phil, an ex-con who bumbles through life trying to earn a quick buck to support his family. After one incident too many, Dell finds himself on the street after his girlfriend has had enough of his antics and kicks him out of his slum estate housing. Bouncing from one job interview to another just to check a few boxes to please his parole officer, he mistakenly ends up at Phil’s apartment as they are in the midst of interviewing highly trained personnel. Seeing Dell is a like breathing fresh air for the first time for Phil who offers him the job on the spot.

Actually based on a real-life story, there is an element of charisma and heart pulsating throughout helped along, none more so than, the Cranston-Hart team-up. Whilst Phil is laid up feeling sorry for himself, Dell comes along to perk him up and make him realise life is for the living. Filled with catheter jokes and a high-speed car chase across the city, Dell brings Phil back to life. When Dell isn’t there, Phil becomes almost like a recluse.

We all know Cranston can do serious and funny, but we tend to forget, every now and again Hart throws in a performance that takes him away from the foolishness we are used to seeing. Yes, Hart is the funny man to Cranston’s straight man but tonally it’s a more subdued affair. His character development has a rags to riches story after he moves into Phil’s apartment, from a scene in which he struggles to use a high-tech shower to discovering his own ability to create art. Both Phil and Dell teach each other about life as they unexpectedly bond and become bros for life. It reiterates there’s more to Hart’s acting abilities than his Calamity Jane skit.

It’s such a joy to finally see a remake that doesn’t completely suck the life out of a film that really didn’t need an Americanised version to pander to the masses. It’s an enjoyable life-affirming movie that stays true to the heart of the original film with almost carbon copy scenes, but a whole lot of Hart.

The Upside is out in cinemas January 11th.