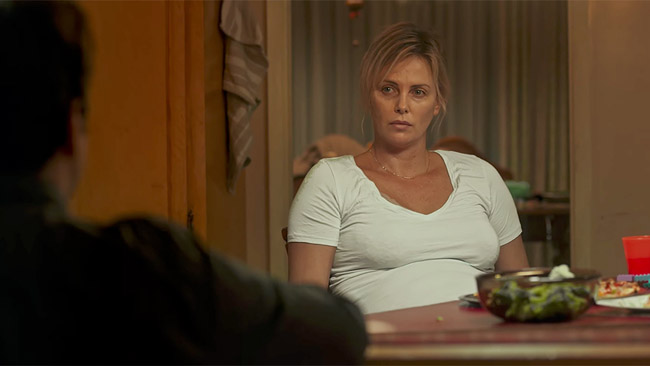 Post-natal depression is no laughing matter. Even in 2018 we hardly hear the cries of those mothers finding it a struggle to cope with day to day life after the birth of their bundle of joy. It’s a struggle many men dismiss as poppy-cock (as experienced from a fellow male critic at this particular screening); as they turn a blind eye to carry on with their conventional lives without the upheaval to their own body or mental state. With Jason Reitman and Diablo Cody’s third collaboration together; after working on Juno and Young Adult, their gentle empathetic approach finally executes a beautifully made mouthpiece to those women who just need to be heard and understood.

Charlize Theron takes the lead as Marlo, Wife of Drew (Ron Livingston) and mother to two young children with another on the way. However, life for Marlo is one long monotonous record on repeat with the added pressure of an autistic son; and a husband that does hardly anything to help to take the strain. When the new baby arrives the exhaustion triples and Marlo becomes a woman on the edge just waiting for that little nudge to see her topple into the abyss.

Before the birth of the newest addition to the family, Marlo’s wealthy brother Craig (Mark Duplass) with the annoyingly perky wife offers the gift of a night nanny as he recognises the signs that his sister is heading for a breakdown. Being the strong, independent woman that she is, she is steadfast in her refusal of any help. With the lack of sleep; a husband that spends his evenings sat on the bed in front of a video game not lifting a finger of support; she gives in and welcomes Tully (Mackenzie Davis) to the nightly routine of the house.

Reitman and Cody tend to skirt around the issues of Marlo’s children. A Daughter on the verge of reaching that “awkward” age and her son being labelled as quirky by everyone; even the school that wants him removed because of his special behaviour. The fact that no one recognises what’s blatantly going on with this young boy is irksome. Instead, the focus remains firmly on Marlo and Tully’s relationship – A relationship that at first see’s Marlo reluctant and envious of Tully’s flat stomach compared to her own just given birth figure – Over an amazingly short time Tully’s presences soon gives birth to a new woman in Marlo. The much younger Tully takes the strain with not only care for the newborn baby giving her the opportunity to rest with added advice too.

As the end nears its conclusion, an unexpected plot twist arises which convolutes the otherwise compelling story. A long drawn out car ride into town to regain her youth; Marlo contemplates what her life and her dreams could have been, hauling us on a journey that could have stayed on the cutting room floor.

With many light-hearted touches, the doom and gloom of what, at times, seems like a single parent scenario dissipates. Reitman and Cody have established a great empathy and tossed it into a beautifully made picture to act as the voice to the unenviable plight of struggling mothers everywhere.

Tully is out in cinemas May 4th