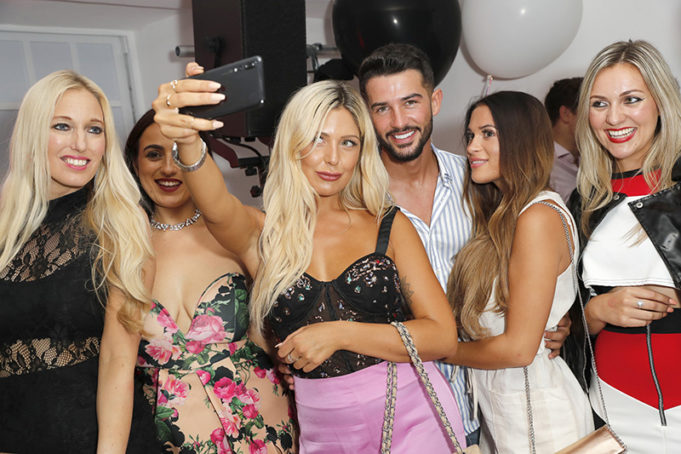 Pop star Mollie King had a smashing time at the Huawei ‘A Phone’ Break-Up Party in the heart of Soho, London.

The party, hosted by tech giant Huawei to celebrate their latest P20 Pro device, gave guests the opportunity to ‘break-up’ with their irritating old smart phone. A whole host of celebrities, influencers and media attended the VIP party, including Ashley James and Love Island stars including Samira Mighty, Frankie Foster and Georgia Harrison. Huawei created the party in response to recent research they conducted, which revealed just how frustrated the nation is with their phones. The study of over 2,000 British smartphone owners discovered 63% are in a love/hate relationship with their phones, with poor battery life cited as causing more stress than arguing with a partner.

Taking place across four floors of a secret Soho venue, guests were urged to vent their smartphone frustrations in a series of themed rooms, including the A Phone Destruction Booth, where guests could take out their rage on old smartphones with one of 10 different weapons including mallets, baseball bats and frying pans. All phones were recycled – so at least some good came from their infuriating existence!  In addition, an unprecedented number of guests were brave enough to smash-up their own phones in the booth, and they were rewarded with a brand new Huawei P20 Pro.

Watch the video and take a look at the pictures below – Is it time to break up with your old phone?

Due to this unprecedented demand, the Huawei ‘A Phone’ Destruction Booth will now be open to the public this Friday and Saturday, giving more frustrated smartphone users the chance to vent their rage and break-up with their phones. Huawei will be giving away a brand new P20 Pro to anyone willing to smash up their current phone – with technical experts on hand to help them switch their data over to their brand new device.*
The A Phone Destruction Booth will be open from 5pm-10pm on Friday 20th July and again on Saturday during the day.
For more information visit www.aphoneparty.com.