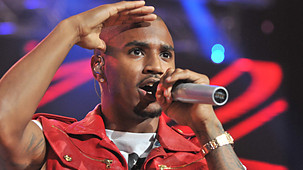 Brixton Academy was at capacity on Monday night (November 12) as thousands of BBC Radio 1Xtra listeners descended onto the venue for the station’s fifth 1Xtra live gig. Monday was the first of four stops in four different cities, and headlining the show was R’n’B sensation Trey Songz.

The task of opening the show was given to UK songstress Tulisa. Dressed all in black with hot pink lips she treated her clearly adoring fans to a selection of tracks including ‘Young’, ‘Live it Up’ and ‘I Need You’.

Sticking with the UK theme, West London rapper Angel graced the stage next. Sounding great live, Angel looked at home in front of the eager crowd who sang his songs back to him. ‘Time after Time’ was literally screamed back at him by fans.

WizKid bounced onto stage after Angel, and his infectious energy seeped into the already hyped crowd and took them to another level. Track after track he had the females on their feet. His set included, ‘What U Wanna Do’, ‘Don’t Dull’ and ‘Love My Baby’. Definitely popular with the guys, although not exclusively, was US hip hop artist Kendrick Lamar. Arguably the most anticipated act, due to his lightening-speed ascension to the top of the charts, Lamar came out to almost every audience member on their feet. Album track ‘M.A.A.d City’ saw people loose themselves, and was the most popular track of his set. His no frills performance was simple, all about the music and included ‘Bitch Don’t Kill My Vibe’ and ‘Swimming Pools’.

Closing the show was headline act Trey Songz, and he knows how to work his crowd. Completing most of his set – which included ‘Simply Amazing’ and club favourite, ‘Say Aah’ – in a tight, white vest Mr Songz had the females stretching their already strained vocal cords to the max. The vest was never destined to stay on for too long though, and he soon tore it from his body, used it to mop up his sweaty brow and handed it over to a gaggle of girls in the front row.

Between all the acts 1Xtra DJs, Semtex and CJ Beatz, took it in turns to keep the tunes coming. The 4000 strong crowd were kept hyped with the likes of Major Lazer’s – Pon De Floor, Kanye West’s Mercy and even Gangnam Style. The first night of 1Xtra Live was a resounding success, BBC 1Xtra know their audience and can deliver exactly what they want.