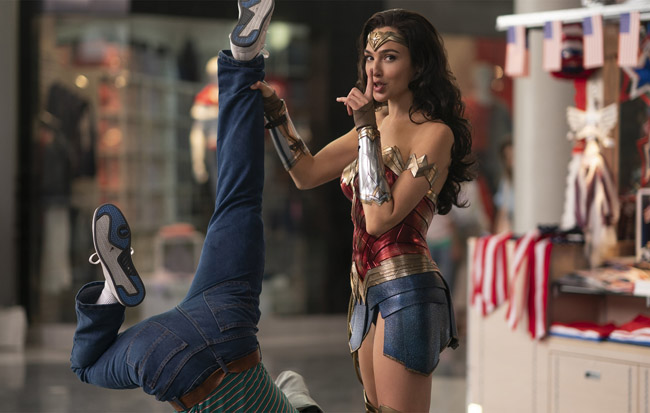 Never have we needed a blockbuster as much as we do right now in 2020!, Something big, bold and bloody explosive to break up the monotony some of us have had to sit through. There really is nothing like switching off with a big bag of popcorn and delving into the make-believe worlds that superheroes give us and hats off to Patty Jenkins and Warner Bros who have more than delivered with their invisible jet with a fun and rapturous canon nod.

The action commences with a lesson, one about cheating to win and a young Diana Prince’s quest in what looks like some kind of Amazonian Olympics that resembles those televised Ninja Games. Fast forward to 1984, Gal Gadot’s Diana now works at a museum, gliding through the building like the goddess she is, she is the envy of every woman including Barbara Minerva (Kristen Wiig), a dowdy looking nerdy colleague who longs for confidence and sex appeal. Barbara’s top priority at the museum is to find out exactly what a mysterious looking crystal artefact (that looks alarmingly like some kind of sex toy made from Kryptonite) is and where it comes from and it just so happens it caused the total disappearance of the Mayans many centuries ago.

Enter Pedro Pascal’s Max Lord, a Hispanic version of Donald Trump. He is a TV star full of his own vanity and ego but with a bankrupt business in ruins and working out of a building that could easily be compared to Trump Towers. Lord knows exactly what this artefact is and knows it can turn his luck around, but everyone knows, people like this always get drunk on the power and they want more except this comes with disastrous world consequences, one that Wonder Woman has to step up and save the day.

Patty Jenkins returns to take the helm on 2017 follow-up, which she also co-wrote, and it’s not hard to tell she has not only done her homework on the specific storyline involving Max Lord but the whole aesthetic from staging to visuals and even colour, paying homage to Christopher Reeves Superman, I suppose setting it in the ’80s went a long way to achieving that feel. Those of certain age who grew up with those movies might feel themselves hurtling back to those fond childhood memories.

There has been much talk over the return of Chris Pine’s Steve Trevor and how he would be returned to the loving arms of Diana even though he was killed off in its predecessor. I’m not going to give that away but think 90’s TV show Quantum Leap and mysterious artefacts and that pretty much says it all. As for Wiig’s Barbara Minerva aka Cheetah, this movie is more of an introduction to the Wonder Women villain, an origin story of sorts, this movie’s villain crown lays firmly on the head of Max Lord, while the odd and scary looking Cheetah becomes his bodyguard in some death-defying CGI catfights.

We can’t miss the social conversation that Jenkins hammers home like a sledgehammer either, rampant with misogyny; I can just hear the eye-rolling moaning coming from a certain core area of this toxic fandom seething. It would seem every other man takes their shot at coming on to the prettiest girl in the room at every conceivable moment, so least to say, Diane Prince has to brush off a few ugly frogs. When it comes to Kristen Wiig’s Barbara Minerva, the plain Jane, nerdy type she is practically invisible until her gradual transformation turns her into a stone-cold cat woman.

Not gonna lie, for a year devoid of the odd blockbuster or two this is one hell of a thunderous way to fulfil the soul, a soaring ride of adrenaline that champions women as the stronger sex. Jenkins teaches us lessons whilst delivering that nourishing Friday night popcorn fodder but just remember, be careful what you wish for.