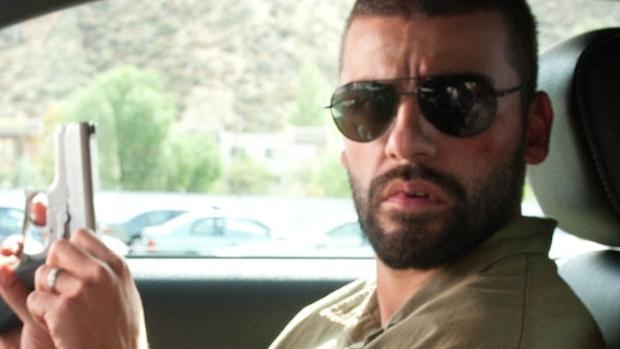 Up until mega-blockbuster Star Wars: The Force Awakens you could very well be forgiven for asking, ‘Who is Oscar Isaac?’ Since then it’s more likely to be ‘Where can I see more Oscar Isaac?’ The talented 36 year old, Guatemalan born leading man has won a lot of hearts in the last few years.

His early roles had a tendency to leave him lurking in the background, simmering with intensity in films such as Drive. But more recently his immense charisma has positioned him as leading man or chief bad guy. And as new LA psycho-thriller Mojave hits cinemas, we take a look at the performances that led him to where he is today. Is he in Drive you ask? Indeed so! Starring alongside Ryan Gosling’s Hollywood stunt driver as the ex-convict husband of Gosling’s neighbour. The hyper-stylish crime drama from Danish director Nicholas Winding Refn is always worth a watch and more so now we are all big fans of Mr Isaac. His character draws the leads into a dangerous criminal underworld with unpleasant and thrilling results. Gosling received the lion’s share of kudos with Oscar Isaac – as was traditionally the case with him until recently – quietly doing an amazing job in the supporting ‘character’ role. But that was soon to change… Having the Coen Brothers cast you as the lead in a titular piece is likely to get you attention. And indeed this 2013 movie was a breakout role. Joel and Ethan Cohen‘s Inside Llewyn Davis, follows Oscar Isaac as a young folk singer as he struggles to work in a freezing Greenwich Village in the early ‘60s. It’s a much loved film and Llewyn Davis’ cat companion proved a hit with viewers. Although this fun element caused problems for both director and lead during filming. The directors were warned by the trainer that the cat could be a nightmare, and it was. Isaac – who has a strong aversion to cats – suffered an infected bite. Taking the lead once again, Isaac plays an ambitious immigrant businessman as he struggles to protect his family and interests in New York during the winter of 1981. This was statistically the most crime rampant year in the city’s history (hence the film’s title). Javier Bardem was initially cast as the lead, but after dropping out due to directorial differences, Jessica Chastain wrote a three-page letter urging director JC Chandor to consider her old drama schoolmate. It worked. The film was a critical hit and cemented Isaac’s potential as a leading man. 28 Days Later and Sunshine writer, Alex Garland made his directorial debut with this increasingly acclaimed and stunningly visualised sci-fi thriller. The movie stars Alicia Vikander as a human-like cyborg alongside Oscar Isaac’s eccentric tech billionaire. Isaac claims to have based his characterisation of Nathan on American chess grandmaster Bobby Fischer and movie director Stanley Kubrick. Both were known for being fiercely intelligent and highly reclusive with darker sides lurking beneath the surface. It was a stunning performance and showed once again how captivating he is on screen. Issac crowned his breakthrough with a standout role in one of the biggest films of all time. Cast by JJ Abrams as the ‘best pilot in galaxy’ Poe Dameron, Issac’s brief but incredibly charismatic performance was a highlight of the blockbusting return to a Galaxy Far Far Away. With many of us nervous to see if the film would work, it was Issac’s early and pitch-perfect delivery that put our minds to rest. “This is going to work!” we cried, but also we soon wished there were more scenes with Mr Isaac. Happily, there is plenty more of the charming actor in Mojave… Oscar Isaac really has time to shine in this classic thriller from Oscar-winning The Departed writer William Monahan. He plays an unpredictable, chameleon-like drifter, Jack who has a chance meeting with a successful but troubled Hollywood star played by Garrett Hedlund. Following a tense desert meeting, Isaac’s character follows Thomas back to his swanky L.A. home and attempts to infiltrate and destroy his seemingly-perfect life. The are multiple tense, and riveting two-man clashes in this dark psycho thriller that plays out in exciting and unexpected ways. Mojave also features brilliant performances from Mark Wahlberg and Walton Goggins (The Hateful Eight), but it’s Oscar Issac’s tour de force performance as the troubled Jack who leaves the biggest impression.