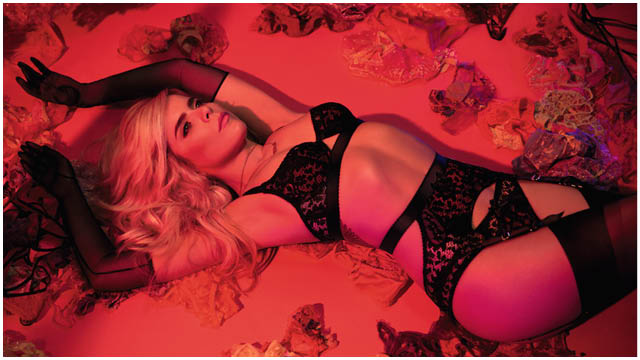 Monday mornings doesn’t get much better than this. We woke up to the brand new Agent Provocateur 2015 lingerie campaign starring… Paloma Faith. In these Paloma Faith Agent Provocateur images Via TheLoveMagazine, the campaign images have been released and the results are simply stunning. Captured by Alice Hawkins, Paloma Faith put her supermodel looks and stunning physique to work in this impressive new campaign. Did you know that Paloma Faith used to work in the Agent Provocateur Soho store? Speaking to TheLoveMagazine, Paloma and Alice to talk knickers, Soho, and people pulling moonies. Love them. From the new collection my favourite is the lacy Nicolle set – it’s the most vintage!

The one where I am laying on the floor with all the kickers around me in the black underwear because I think it looks like a scene from a David Lynch film. Speaking on the concept of shoot and video Alice Hawkins says,

Paloma & I once worked together as shop girls at Agent Provocateur in Soho – which we’re both very proud of, so my concept was to re-enact this experience.

The video below see’s Paloma Faith in seductive poses, while reflecting on her time at Agent Provocateur. It’s all very nostalgic an uber sexy.

Visit www.agentprovocateur.com now and see the full interview over at www.thelovemagazine.co.uk

UPDATE: PALOMA FAITH TAKEOVER @TheMissAP Tune in on 8th Sept on Snapchat and catch her live Q&A on Periscope at 12pm GMT.