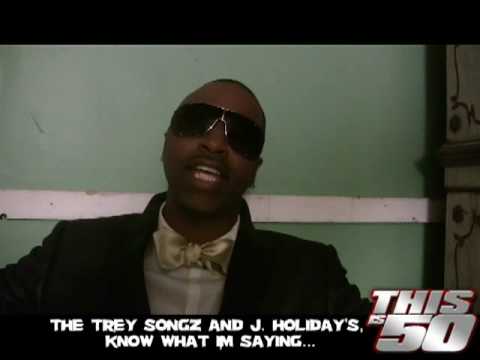 Hearing the name Slim of 112 should be no surprise to any RnB listener. Slim real name, Marvin Scandrick III formed one fourth of multi-platinum selling r ‘n’ b quartet. The Atlanta, Georgia, native, who possesses a unique and distinct, high falsetto voice, has recently traded providing lead vocals for the Grammy nominated collective and opted to embark on a solo career. Love’s Crazy is Slim’s first solo album and he is back to prove that whether within a group or completely own his own, he is a force to be reckoned with. The first single off his debut solo album, Good Loving featuring Ryan Leslie and Fabolous went straight into the Billboard top ten. So Flavour caught up with him to see how everything is going.

How are you?
I’m great thanks, the album is finally out in America and I have been getting great feedback from the album. It has been doing extremely well over here and I’m just trying to have the same outlook outside of the States.

How are you feeling about your first solo album?
Excited, because I am the C.E.O of my own label, so everything has been going great. I have a great partnership with Asylum Records and it is an incredible situation. I am hands on with everything and I am the captain of my own ship. So, now I can call the shots and it is a great look when your working with people that believe in your project and your dream, just as much as you do.

Who can we expect on the album?
Faith Evans, Big Boi from Outkast, Ryan Leslie, Fabolous, Young Burg and one of my artists on my label called Degezo. What I wanted to do with this album is make sure it’s not over saturated with big name artists and producers. I really wanted to stand on my own two feet and for people to understand my craft, not just who I worked with and mission accomplished. But my second album will properly star huge artists but that is not what I wanted to do with my first solo project.

Is there a release date for in the U.K?
We are trying to work on that right as we speak. My current contract only deals with the U.S.A and Canada. So we are dealing with it as we speak, but once that is dealt with I am going to do a large campaign like we did in the States and hopefully all my U.K fans will know when I’m over.

You have your own record label called M3 Productions, why did you set it up?
Well I always wanted to have my own label and elevate my career. I didn’t want to limit myself just as an artist. You know being in the game for 12 years now if I just stuck on one level I would feel I cheated myself. So, what I wanted to do is start my own label and actually bring out other artists and give other artists the chance like P.Diddy gave 112 a chance when we first started.

So, would you work with P.Diddy in the future?
Of course, You will properly see a great collaboration with this album. We are definitely talking, he calls me up and congratulates me and tells me that I am doing an incredible job.

Do you feel the collaboration with Allure gave 112’s international recognition?
That was definitely one of the songs that gave us international presence, as well as “I’ll Be Missing you” and from there, there was “Sky’s The Limit” and it was a great push. I’m just grateful and humble for being in those positions so everyone could understand who we were. We have the likes of Estelle and Leona Lewis who blew up in America, would you consider collaborating with any UK artists?
Of course, I would love to. One thing I love about UK music is the energy. You really pay attention to the lyrics and the artist. I’m really appreciated of my fans everywhere and especially in the UK.

How has the transformation of being in a band and doing a solo project been?
Well it was definitely a challenge first starting out. You are used to be in a group with all lead singers. Even though I was the front man of the group it took all four members to make the 112 sound. It was a challenge at first but I quickly adapted to it and that is pretty much what’s going on right now.

What is the first song you perform on stage?
I will properly perform my new single “Good Loving” ft Ryan Leslie and Fabolous just to show you what the energy is. I will have to sing the 112 classics that everybody knows and loves, because I will never let that go. It would be a very energetic show. I have a great catalogue and we will just have a great time.

Which artists are you liking at the moment?
I’m really feeling Kanye West, Ludacris and T.I. I pay a lot of attention to a lot of people and my views are really diverse. But I’m really into artists that create a movement and change. Like I will always be a U2 fan, because Bono takes his music outside of music. He helps the world and artists and that makes me feel good. It shows that we are not self-centered but we reach back into our community. It’s a great look, it shows the real aspects of what artists are really supposed to do.

Can you tell us the two things the Americans love?
We love our country, our sports. We love different cultures and people.

What advice would you give to an up-and-coming artist?
To study your craft and take pride in it, also to really know what you want as an artist. Don’t go along with the trend. Be yourself, be true to who you are, because at the end of the day that’s what matters. Make great music that is going to last forever.

And finally, what do you want to say to your fans over here in England?
I love you, I love you to death and I am definitely working hard on getting my music out there. I want everyone to check out my Myspace page. It’s myspace.com/slimof112. You can also purchase the album on iTunes.

Slim never revealed weather 112 will reunite, but with Dru Hill releasing an album in 2009 we are certain 112 will as well.