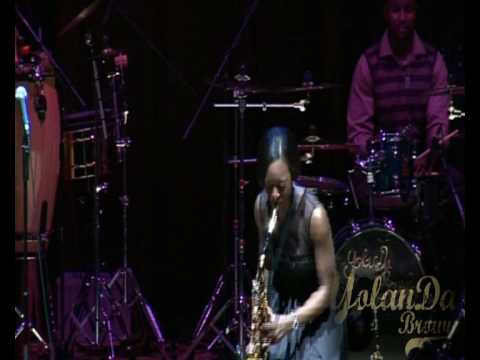 Not many people can claim to have ‘found their voice’ through a saxophone, but for YolanDa Brown every note she plays is a reflection of her heart and a reflexion of her soul. Having established herself as a unique performer gracing stages worldwide with good looks and brains, the 26-year-old East Londoner is not your usual saxophonist. Over the past two years she has established herself as one of the UK’s most successful independent musicians – completing a world tour and selling out gigs at the Jazz Café and Pigallé Club in London.

Her performances at comedy shows, nightclubs and theatres has brought the saxophone to places where it’s never usually heard and made YolanDa stand out in the male-dominated world of instrumentalists. It’s quite rare for a young woman to play the Tenor Saxophone as this instrument is considered to be more masculine, due to its deeper, huskier tone. As a result of this, YolanDa is in great demand for live and studio work.

Flavour caught up with the UK’s premier female saxophonist for an exclusive chat on the eve of her double nominations for Best Jazz Act in the MOBO Awards and The Urban Music Awards 2008.

What inspires your music?
Everyday life experiences let me convey my feelings through my music. Inspiration is everywhere.

How would you describe your musical style?
It’s conversational! It’s not over complicated or too simple, but it’s something people can easily attach themselves too.

Why did you choose to play the saxophone?
The saxophone pulls my music out from within, literally; and I felt the Tenor and Soprano let me express myself the most. Through the saxophone, I found my voice.

Did you have lessons?
I started playing the sax at age 13 and had lessons for two years, after that I began teaching myself.

Is there another instrument you would like to play?
I would love to be able to play the flute; it would be good to add different textures and many new contrasts to my performance.

Which genre of music do you most enjoy playing?
I really like to play a fusion of soulful-reggae sounds.

Do you compose many of your own songs?
Yes. I do a few cover songs, but I like to improvise and create my own sound. My up-coming album is all original material.

You had a successful debut EP Finding My Voice. Are you working on any other projects?
I have just released my second EP A Step Closer. I am also currently working on my new album to be released in April 2009. I will be working with Self Taught Beats who produced many of my tracks.

You have previously worked as a TV presenter; will you consider doing more of this?
I presented a talk show called Esther on a sky channel, which was about inspiring young women in business, but I want to focus on my music for now.

You also have two Masters degrees, and are studying for a PhD. How do you fit it all in?
I just go with the flow and take each day, and each event as it comes, really. I like to keep busy; I also teach the saxophone and am involved in youth projects. I want to be a positive role model for people as well as a performer.

The Urban Music Awards 2008 – 7 November at The O2
www.myspace.com/missyolandabrown