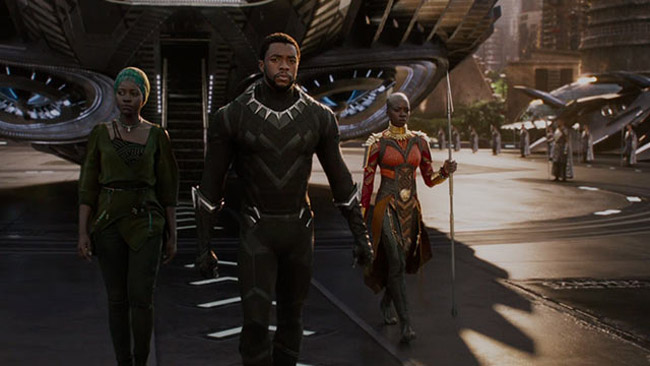 Since Ryan Coogler burst onto the scene with his debut, Fruitvale Station he has set the precedence in his affecting and hard-hitting storytelling; cementing his name as one to watch in delivering films that communicate to audiences who have rarely been given the chance to shine. It’s been a long time coming but Coogler’s POC cinematic revolution is finally upon us in Marvel’s Black Panther. Not just a celebration of black excellence in an arena oversaturated with clean-cut white men, but also a crowning glory for badass women too; women who stand next to their superhero leader, and lead the charge in his fierce protection. Coogler has no qualms in shouting from the rooftops that indeed, men would be nothing without the fighting support of women.

The film opens with the foundations and the very roots of this origin standalone story being firmly laid. Flashback sequences yield an insight into Wakanda’s most precious weapon, Vibranium, a substance that has contributed to the countries many technological advances. Swiftly, changing scenes to 1992 in California where the reigning Black Panther has to deal with his own treasonous kin. Fast forward to the present day as T’Challa’s (Chadwick Boseman) father dies. He timidly takes over the reins of ruling over the glorious land of Wakanda; Flanked by his wonderfully beautiful and fierce female royal army headed up by the ferocious Okoye (Danai Gurira).

To the outside world, Wakanda is just a third world country, one of no importance. From the inside, its Hi-Tec train system and gadgets run smoothly besides old African traditions and glorious costume. Tribal gangs are summoned from around the country to be a part of the ritual crowning of their new King. In the meantime, we are introduced to our antagonists Michael B. Jordan’s righteously angry Erik Killmonger, and his partner in crime the unhinged, robotic weapon armed Ulysses Klaue (Andy Serkis).

British actress, Letitia Wright brings the humour as Black Panther’s tech-savvy sister Shuri. She comes into her own, full of cheek and enthusiasm as she virtually accompanies her brother alongside Okoye and undercover spy and love interest Nakia (Lupita Nyong’o) on a mission to capture Klaue in South Korea. The scene leads to the introduction of Martin Freeman’s CIA operative Everett Ross as a useful ally in their fight. Through a sequence of sneaking around, the trio are spotted leading into a slick battle scene; Starting with Okoye whipping off her weave and tossing it like a Frisbee and ending in an eye wateringly impressive CGI car chase across the city.

For all its purring glory, Black Panther isn’t without its faults. Although Jordan’s villain goes against the stereotypical norms and actually has a layer or two to his character; Coogler has missed a trick in being able to flesh out his back story. One moment he is this anxious kid, the next, an overzealous and brutally righteous threat to T’Challa’s throne. The same has to be said for Serkis’ Klaue, a character just thrown in for good measure but really didn’t make any difference to the plot either way.

It’s a tremendous cast performance all round. The immensity of humble pridefulness that emanates from each actor in being able to stand on such a stage as Marvel’s as its first all black comic-book movie is overwhelmingly prominent. It’s a groundbreaking achievement, and Coogler firmly sports his crown in blurring the lines between the cultural importance Black Panther is set to play in bringing down the dinosaur illusions of Hollywood and just losing its audience into a thrillingly exhilarating superhero movie.