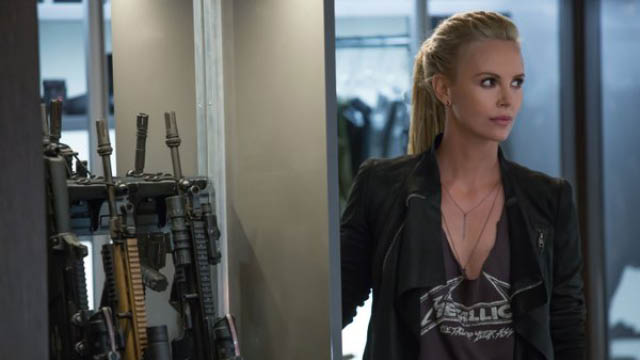 Fast 8 aka Fast & Furious 8 has confirmed Charlize Theron, Nathalie Emmanuel and Scott Eastwood will all star in the smash hit blockbuster movie.

As well as Hollywood hottie Eva Mendes who has been rumoured for the Fast and Furious 8 movie too. Returning character Nathalie Emmanuel who played Ramsay the hacktavist posted this photo on (below) instagram confirming her role in Fast 8 aka Fast & Furious 8. If you haven’t seen it already, you should check out this special feature on ‘How to date Nathalie Emmanuel‘ where the beautiful bombshell who also stars is smash hit TV series ‘Game of Thrones’ alongside Emilia Clarke who turned down the main role in ‘Fifty Shades of Grey’ gives us her tips on what’s she like on a first date and how to date her.

Nathalie Emmanuel selfie with Michelle Rodriguez, Tyrese Gibson and Ludacris who is hosting this years Billboard awards alongside Ciara.

On the official Fast 8 twitter account, they posted this amazing photo of Charlize Theron who is confirmed as playing Cipher in the movie. Cipher is probably her code name and we are yet to find out what her full role is, but if its anything like her role in Mad Max Fury Road then we are in for a huge treat.

This video below see the cast of Fast 8 in Cuba. This is a history in the making moment as this is the FIRST EVER Hollywood blockbuster to be allowed to film in Cuba.

Fast and Furious, welcome to Cuba

Welcome to Cuba – #F8 is now in production!https://t.co/0aneIVMhJm

Also confirmed for Fast 8 is actor Scott Eastwood (son of hollywood legend, Clint Eastwood). Scott Eastwood will play alongside Kurt Russell (Mr. Nobody) as his new protege. We do not know what his character name is yet, but as soon as we do, we will let you know. Jason Statham who we featured in our Best Films Made For Under A Million who plays the seriously hard man Decker Shaw will also return in Fast 8. We love Jason and we cannot wait to see the stunts he will pull in the new movie. Another Character to look out for is the ginger giant of a man Kristofer Hivju who you may remember from the movie After Earth with Will and Jaden Smith and Game of Thrones.

Vin Diesel has been posting videos on instragram along with the director Gary Gray revealing information on the new Fast 8 Movie. Here’s some of the things Vin Diesel has said…

Fast 8 aka Fast and Furious 8 will hit cinemas on the 14th April 2017. Expect lots and lots of information, photos and videos to be released during the process. We will keep updating this page and the website with new information as it’s released.