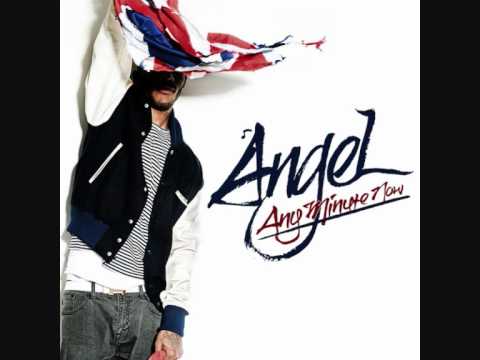 In his mid-twenties he set up production company Parallel Music with his brother, writing for Pixie Lott, Jason Derülo and No1 single ‘Green Light’ for Roll Deep. He has a massive underground following thanks to producing and mixtapes, including the recent Any Minute Now. Lately he’s been in the studio with Frank Ocean, working on his debut album. Flavour welcomes back Angel and asks the questions his fans want to know…

Why did the name Angel?
I’m very spiritual; I think I’ve been put here to do angelic things, like send messages and heal people with music.
(Mary Batson, 19, East London)

What’s the biggest challenge you’ve faced since being discovered?
Am I good or not? Am I good enough to stand up with the rest of the UK’s finest like Jessie J, Dappy, Tinie Tempah and Loick Essien. We’re all doing similar genres of music, and for someone coming up straight away, you think, are you as good as them?
(Jade Samuels, 23, Essex)

How has your background shaped you into the artist you are today?
From the age of 10-11, I was doing two schools a day, being promised things and not getting them, being out in the cold with no windows and travelling up and down to do shows. It’s been a long grind, but though some of the times were hard, if I hadn’t done that I wouldn’t be as shaped as I am now.
(Michelle Harrison, 20, Manchester)

Your little brother is the rapper A Star. Will you do a tune together?
Yes. I’ve been busy and we don’t see each other a lot. When that time comes we will do a tune together. We’ve got a bond. It would be like, I know what I’m doing, he knows what he’s doing, let’s do this, it will be fun.
(Lorenzo O’Neil, 25, Harrow)

As a singer and a producer for years. What do you love most?
I like creating and being a composer. I love to create that meditation, that beat I’m going to be performing on and delivering on. I love making melodies and delivering them. I love both the same, but in different ways.
(Niraj Patel, 20, Hounslow)

Who is your musical inspiration and how do you aspire to inspire other acts and music listeners?
The biggest would have to be Quincy Jones. You’ve got to listen to what is happening out there, you got to work hard, deliver and put in what you want to get out. Hard work pays off.
(Zoe Christos, 20, Ealing)

Who is your angel in life?
The creator, the God.
(Hannah Wright, 21, Peckham)

To impress the girl of your dreams, what car would you ride out with?
A black Porsche 911. It’s a vintage car, it reminds me of Beverly Hills. It’s just a dream car, two-seater and me and a chick.
(Kamil Kenyatta, 22, Enfield)

You may be Angel, but what’s the most devilish thing you’ve done?
[Laughs] I put pins on someone’s chair. I was young, it was in school, the poor little girl was in tears; it wasn’t nice at all, it was devilish. I’m friends with the girl now, though.
(Louise White, 24, Birmingham)

Any collaborations this year?
‘Go In, Go Hard’ out now, it’s part of the new soundtrack for StreetDance 2 with Wretch 32 off my EP 7 Minutes Before Time. I’ve got a new mixtape, Any Minute Now out now; I’ve got a feature with Mark Asari from Encore on there. I’m finishing the album; I’ve got it, I’m just really polishing it up.
(Kara Tsolias, 23, Tottenham)

Have you ever been star-struck?
No, because I haven’t met the people yet. I would be if I met Brandy, Quincy Jones, Rodney Jerkins and Prince.
(Maya Palmer, 18, Bristol)

How did you meet Frank Ocean and has he been inspirational?
It was random: I was working with producers that came over from LA. On the second to last day we were chilling and Frank walked in, he had a show in XOYO. We started playing the piano and drinking wine, it was crazy. Then I recorded ‘Rocket Love’ that he’d written. It’s played a major part in the creation of my album, obviously Frank’s massive and a credible songwriter who writes a lot of hits.
(Ash Campbell, 19, Bromley)