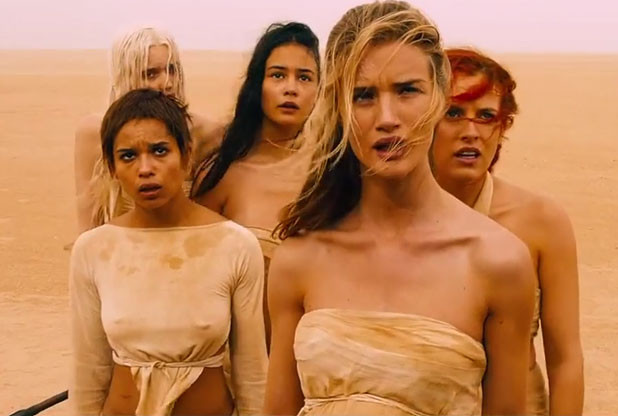 As Mad Max Fury Road has been unleashed in cinemas, everyone seems to be asking the same question. Who are the Girls – Wives in Mad Mx Fury Road? Well apart from the lead actress who is of course the formidable Charlize Theron, the other actresses in Mad Max Fury Road are as follows. Rosie Huntington Whiteley is a model turned actress. As a model you would have seen Rosie in Agent Provocateur adverts, Victoria’s Secret sexy lingerie campaigns and so much more. In terms of acting, Rosie has been seen in Transformers: Dark of the Moon and now Mad Max Fury Road. Zoe Kravitz surname should say it all. Yes Zoe is the daughter or rock star Lenny Kravitz and Lisa Bonet. You would have seen Zoe in movies such as Divergent, X-Men: First Class, After Earth, Insurgent and many more. The stunner rocks a signature shorted hair look in Mad Max Fury Road which might throw you off her scent as she has recently been wearing braids in many of her photo shoots. Stunner Riley Keough comes from celeb royalty. The Actress and model Riley is the eldest grandchild of legendary singer Elvis Presley and actress Priscilla Presley. Her mother is Lisa Marie Presley and her father is Danny Keough. As a teenager, Keough started modeling. Her first appearance was on a runway for Dolce & Gabbana. Aside from modeling as an actress you would have seen Riley in Magic Mike, The Runaways, The Good Doctor and more. Look out for more Riley coming to a screen near you. Bomshell Abbey Lee Kershaw may look like Daenerys Targaryen (Emilia Clarke) from Game of Thrones in her roll in Mad Max Fury Road. However the Blonde Victoria’s Secret model and actress will be hitting our screens again in films such as The Neon Demon and Gods of Egypt and expect to see Abbey is a range of sultry photo shoots and magazine covers soon as Abbey isn’t afraid to go nude in photo shoots and why should she be afraid with a body like that? Courtney Eaton is the beautiful Australian actress that plays Cheedo in Mad Max Fury Road. Courtney starred as herself in the TV series Up Close with Carrie Keagan and will also been seen alongside Abbey Lee (above) in the forth coming movie Gods of Egypt. We hope to see more of this stunner in the future. Check out the image above.